Fia-faia is the celebration that opens the Christmas festivities in the Bergadan villages of Bagà and Sant Julià de Cerdanyola. Although nowadays –and since quite ancient times– it’s fully assimilated in the Christian Christmas, its origin goes back far before the Christianisation of these lands; it’s a pagan winter solstice ritual, a prayer to the sun to lengthen the days again.

On this year 2020, it’s been 10 years the Fia-faia of Bagà and Sant Julià de Cerdanyola was appointed as “Traditional Festivity of National Interest”. Moreover, on the last 1 of December, this celebration –along with the fire solstice festivities of 61 other towns of the Pyrenees (French, Catalan, Aragonese and Andorran)– had its 5th anniversary as UNESCO Intangible Cultural Heritage of Humanity.

Despite this joint candidacy of 61 celebrations, Fia-faia is different from the others. Currently, no other faia (meaning torch) burning remains in the Pyrenees for the winter solstice, they all take place around the summer solstice. It’s true that some Christmas bonfires can still be found, but, if they ever were accompanied by torches, these have been lost. Thus, if the fire solstice festivities of the Pyrenees are special enough to be declared World Heritage, Fia-faia is unique among unique.

So, what’s all that Fia-faia thing about, anyway? Well, to put it short, it’s a torchlight (faies, the plural for faia) parade, followed by a faia burning with bonfires downtown. However, it’s quite a ritual, form the making of the faies to the traditional dance and the celebration’s final meal, all wrapped in the traditional chant “Fia-faia, que nostro senyor ha nascut a la paia”. Let’s go step by step.

Faies are made of bundles of dried herba faiera (faia grass) –a particular plant. Traditionally, its harvest starts on St. Martin’s Day, in November. The faies are usually 1.5 to 3 metres long and 1 to 2 palms in diameter. The torches of Bagà are slightly different from the ones of Sant Julià; the main difference lays in the inner stick, called ànima (soul): the Baganese torches never have it, while it can’t be missing in the Sant Julià ones.

Once they’re made, they must be left to dry out while waiting for the celebration day to come. 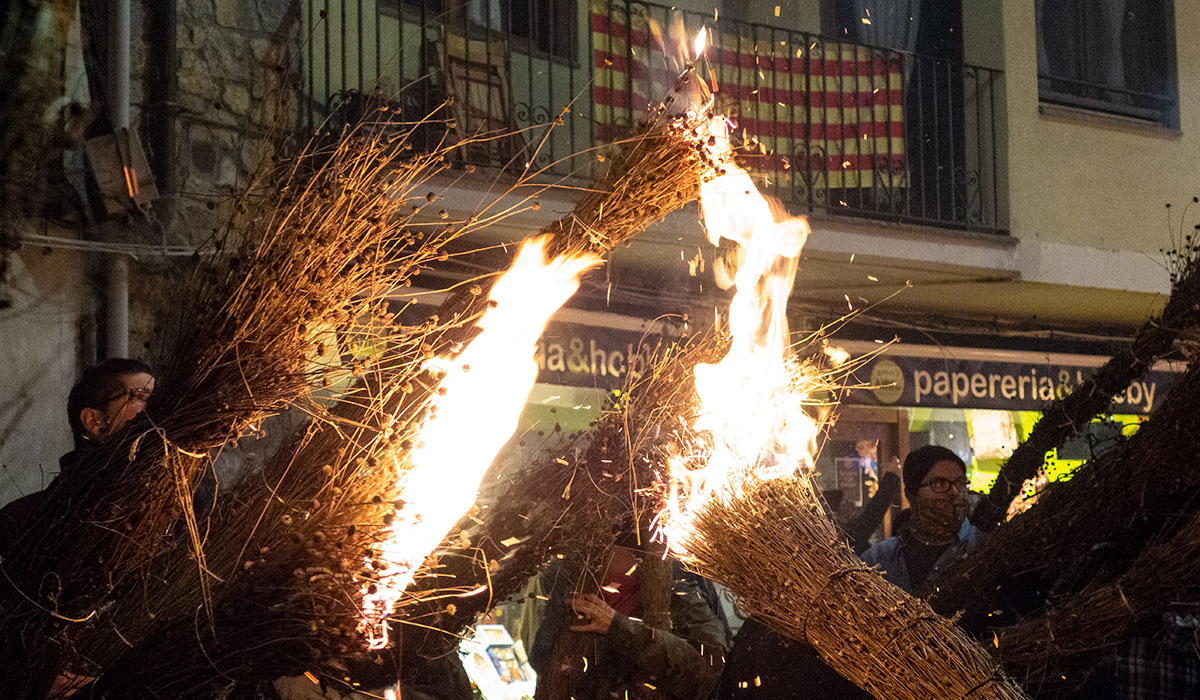 Gathering of torch carriers, climb to the hills, and lighting of the fire

On December 24, the faies are carried to a nearby hill (the Siti in Bagà and the Clos in Sant Julià) to light them up. In Bagà, around 5 pm, a horn call summons the torch carriers (fallaires) to the main square and, at 5.30, the ascent to the Siti begins. In Cerdanyola, the climb is continuous, without a previous gathering, and the horn is blown from the fire-lighting site.

At 6 o’clock, the fallaires baixadors (the ones who’ll carry the lit faies downhill) form both towns exchange fireworks to commence the ritual. The fire is first lit in Cerdanyola. In Bagà, they wait right until the last beam of light vanishes from the sky, to capture it into the bonfire.

The torch downhill parade starts first in Sant Julià, short after 6 pm. In Bagà, it won’t begin until 6.30. The faies are lit in the bonfire and, down in the village, the music starts to enliven the descent. In Cerdanyola, they stop halfway, at La Creu, where the authorities place a symbolic protection kerchief on the fallaires baixador’s necks. In Bagà, this kerchief is given at the arrival in town.

When they get to town, the fallaires baixadors will deliver the fire to all the faia carriers who’ve been waiting for them at the village.

The great burning in Bagà is spectacular, with over 500 torches that expand further around town every year, as it used to be in ancient times; the main square has become too small.

When the faies have shortened, they are stacked on the ground and they turn into small bonfires over which it is custom to jump. In Cerdanyola there is not such tradition of jumping over the bonfires, since they’re filled up with firewood and therefore much larger.

In Bagà, the boldest ones pass the burning faies to each other throwing them through the air. In Cerdanyola, the ànima of the torches makes them difficult to throw, but instead makes them very movable. Thus, they are used to draw fire figures in the air.

People form a circle around the communal bonfires to dance the traditional dance. The circle grows pretty fast so, eventually, dancers organise themselves in concentric rings.

When the fires become nothing but embers, cake with quince jelly alioli –the traditional meal of the festivity– is given to everyone along with a drink.

The Christmas Vigil and the Endreça of Sant Julià de Cerdanyola

In Sant Julià, when the Fia-faia is over, the youngsters keep vigil until dawn around the communal bonfire. Furthermore, during the night, the curious Endreça takes place. The Endreça (literally, putting in order) is a rare tradition which consist in moving any object that can be found outside the houses. On Christmas Day, each family must seek and find whatever has been “tidied up”.

Fia-faia is an ancient celebration which, against all odds, has managed to survive in these two Catalan villages. It’s part of our cultural identity and we hold it in high esteem; it’s part of our legacy, of our millenniums of history, and we are deeply proud of having been able to preserve it and even prouder of it being acknowledged as Heritage. Ours, of course, and everyone’s. Of anyone who wants to be a part of it. Using the words of the historian Xavier Pedrals, the Fia-faia is ancestral, magic, unique.

And, although this damned year –which is luckily over– is not a good time to come discover it, let me invite you to dive into its spell –maybe in the following years, though.

Find out more or adjust your settings.